Whilst we faithfully praise the power of the humble earthworm, the earthworms work is never performed in isolation, it is the symbiotic complex web of microbial life that keeps the world, or more to the point the earth turning. Studying the magical world of the Soil Food Web under soil microbiologist Dr Elaine Ingham has been a revelation, and has certainly kept the mind focused whilst the world seemingly falls into disarray. 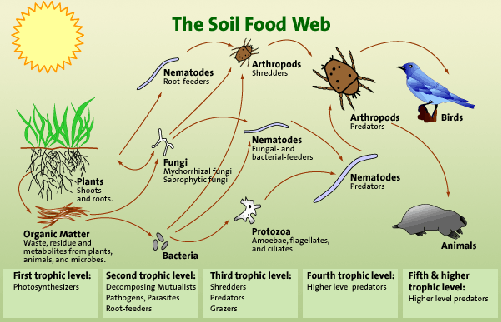 As relationships and beliefs have been challenged, one truth stands tall and that is the divinity of life. Nature, God, Pachamama, the Universe call it what you will, does not make mistakes. Only when we disturb and interfere with the balance does disease and degradation ensue.

Dr Elaine Ingham is famously known for averting the release of the genetically modified Klebsiella-planticola bacterium in the late 1990’s, and to say that this would have been catastrophic would be an understatement. Divine intervention comes to mind. Despite the approval of the GM Klebsiella bacterium from the Environmental Protection Agency (EPA) as being safe for humans and animals, the EPA had not tested the bacterium on plants. Dr Elaine Ingham and her team, then associate professor at Oregon State University discovered that the Klebsiella bacterium produced alcohol, a substance highly toxic to plants. Had this bacterium been marketed and released into the wild all terrestrial life would have been obliterated by alcohol poisoning, thanks to Ingham’s intervention we have been saved from this apocalyptic scenario.

As one can imagine Dr Elaine Ingham is not so popular amongst the bio-tech and big-ag industries, not only for preventing the release of the bacterium, but for liberating farmers from dependence on synthetic inputs. For decades she has been working worldwide to repair and restore the microbiology in the soil, saving farmers from financial ruin and despair whilst increasing harvests by up to 200% and reducing water consumption by 50%.

In the UK more than one farmer dies a week from suicide, in India it is as high as 45 a day. There is certainly a global pandemic of farmers suicide, and it is not difficult to understand why. A changing climate, lifeless soil, endless costly synthetic inputs, fragile global markets and the desire for perfectly shaped produce presents a mountain of obstacles for our farmers. There are however remedies to these tribulations, and the Soil Food Web holds the answer.

According to Ingham we can reverse global climate change within 10-15 years by applying the Soil Food Web within agricultural practices. Soil is a giant carbon sponge, yet the conventional method of tilling and spraying synthetic chemicals destroys the microbiology in the soil, slicing and dicing the beneficial microorganisms responsible for carbon sequestration, soil structure and plant growth. Quite simply it is the waste product (poop) from beneficial microorganisms (and earthworms) that supply plant soluble nutrients to the root system of plants. The root system of plants excrete exudates (sugars, proteins and carbohydrates) feed bacteria and fungi, that are then consumed by beneficial microorganisms, the ultimate cyclical symbiotic relationship, nature makes no mistakes. When ‘icides’ (literal meaning to kill) are applied to our soils we are disrupting the Soil Food Web, every organism on the planet has its role in maintaining the natural balance. Amidst fears of scarcity of natural resources required to produce food to feed a growing global population we can be assured that when we move away from dependence on synthetic inputs, the Soil Food Web can be restored and humanity can be provided with the nutritionally rich food it was designed to receive.