The Urban Worm was founded on the guiding philosophy of Ernst Fritz Schumacher, pioneer of the green movement and author of Small is Beautiful: Economics As If People Mattered. Advocating for small scale, decentralised, appropriate technology for the advancement of society, Schumacher condemned industrialisation’s dependence on fossil fuels, arguing it would consequently lead to the destruction of the environment and society.  Now 50 years after publication his warnings resonate as we are faced with a myriad of inconceivable challenges. Climate breakdown, severe natural resource depletion, political unrest and savage capitalism are undermining the fabric of life, and thus our food security.

Environmental despair has entered western mainstream thought with a wave of ‘eco-anxiety’ illustrated by the rise in climate protest groups, notably Extinction Rebellion.  As the West belatedly begin to pay attention to the magnitude and reality of climate breakdown, despite having ravaged the global south for decades leading to the displacement of millions, feelings of helplessness and trauma come with the territory.

However hope is here and there is no need to feel helpless or traumatised anymore; nature holds all the solutions to repair and regenerate the damage we have inflicted upon the earth. Microbial life will save us: small really is beautiful.  Despite being relatively unknown in the United Kingdom, Effective- Microorganisms (EM1) Technology is being used in 103 countries, revolutionising industry worldwide and contributing to progress in environmental management, agriculture and human health. Discovering EM1 in the Philippines in March 2019 whilst on vermiculture research, and since having the opportunity to attend The International Nature Farming & EM Technology Workshop in Saraburi, Thailand, in September this year, with support from the Royal Horticultural Society (RHS), it is with great confidence and hope we can look to the future.

A little bit of science to put you in the picture:

Effective Micro-organisms (EM) are a combination of fermentation-inducing beneficial microbes that collectively function to purify and regenerate their environment, discovered by Dr Teruo Higa at the University of the Ryukya, Okinawa, Japan in the 1980s.  Micro-organisms are opportunistic and lazy by nature; where there is a dominant population others will follow suit, leading to either a regenerative or degenerative environment. The application of EM creates an environment where regenerative microorganisms dominate, eliminating harmful and toxic micro-organisms.  EM belong to a combination of three classes of micro-organisms – photosynthetic bacteria (Rhodopseudomonas palustris); lactic acid bacteria (Lactobacillus casei); and yeast (Saccharomyces cerevisiae).

Photosynthetic bacteria are our oldest ancestors – their proliferation created the foundations for life on Earth. Being anaerobic (oxygen-haters) and capable of tolerating extreme high temperatures of 700°C  they throve off a diet of carbon dioxide, methane, ammonia and hydrogen sulphide, whilst excreting oxygen, water, nitrogen, amino acids, sugars and sulphur. Consequently photosynthetic bacteria created an intolerable environment for themselves by overpopulation, pushing them to the corners of the earth.

EM1 is being manufactured in 56 countries and has been embraced and implemented by governments, institutions, businesses and individuals for a myriad of applications from the purification of water, air and soil, the management of waste, agriculture, to use within the construction industry; from supporting human and animal health to household and industrial cleaning.  There does not exist an industry that would not benefit from the use of EM1. The most commonly used form of EM1 in the UK is bokashi, the translation of fermentation from Japanese. Bokashi bran is inoculated with EM1 and used a method for household organic waste management, in particular for urban environments as the process it undertaken in an airtight container.   As opposed to hot composting which is a decaying process that loses nutrients, fermentation retains the energy of the organic waste making for a superior fertiliser.

EM1, bokashi and worm farming work in perfect harmony together and provide a solid platform to build the foundations for regenerative communities. There is not the space to share here the global successes of EM1 but for those of you who need some hope in their life please read An Earth Saving Revolution or Our Future Reborn by Dr Teruo Higa. It is difficult to communicate the enormity of the promise and potential EM1 has in helping us tackle the challenges we face, and it is with disbelief that the UK is trailing behind with the adoption of this technology – although being under no illusion that the UK is in any way advanced in our innovation in compared to global successes.

The Urban Worm has always been a superfan of microbes, as it is in fact the microbes that do all the hard work in worm farming; it just happens the worms get all the attention and praise, plus they are easier to love because we can actually see them. Despite this we have a newfound excitement for EM1, a miraculous combination of microorganisms working together to purify the earth.  The Urban Worm will be delivering bokashi and EM1 workshops in the new year, sharing the knowledge and learning from attending the international workshop, with thanks to the RHS, Dr Teruo Higa and The Nature Farming Centre. 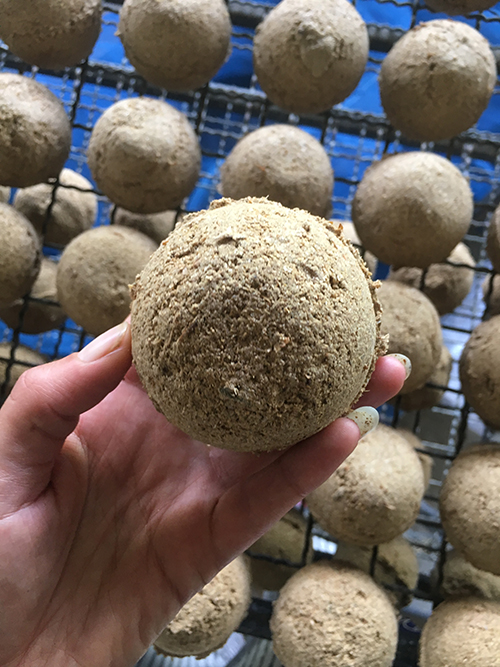 Left: Bokashi bran inoculated with Effective Microorganisms. Above: An E.M. mudball ready to be used to clean up waterways.

If you would like a copy of the report from Anna’s attendance at The International Nature Farming & EM Technology workshop please contact RHS Wisley Garden Library, or a pdf may be requested by email from library.wisley@rhs.org.uk